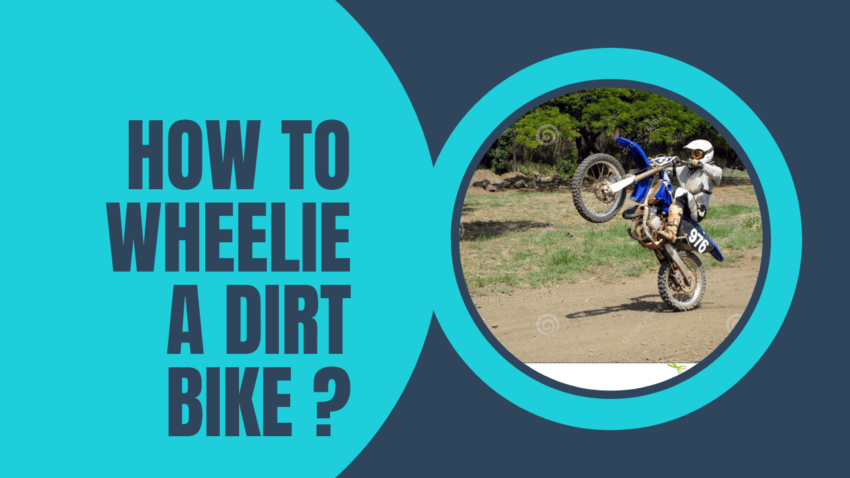 Knowing how to wheelie a dirt bike is not only fun and looks ace. It can get you through and over some tricky and otherwise very difficult situations. If you’re trail riding you will need to be able to pop the front wheel up to get over logs, cross streams, and challenge rutted or uneven terrain. Riding a wheelie isn’t really all that hard. However, as with any skill or “trick” on a dirt bike, the more you practice – the better you get. Since most non-beginners know how to ride a wheelie, the following is intended for beginners.

Steps of How To Wheelie a Dirt Bike

If you want to become a master to do a wheelie on a dirt bike then try to learn and follow these steps.

Mastering a wheelie will be a lot easier if you have the best dirt bike and put the motorcycle in first gear. The first gear is the lowest gear and the easiest for climbing hills. Power wheelies are about using acceleration to pull the bike’s front wheel upward so you will not have to worry about shifting. Staying in first gear will allow you to pull the front wheel of your bike upward much easier than in any other gear. Getting the front wheel off the ground is the easy part. Now that you’ve smoothly and gradually got the front tire up, balance and throttle control comes into play.

Ideally, you don’t want to have to use the acceleration of the bike to keep your tire up. You want to find the balancing point so that you can MAINTAIN speed. If you start in second, you may end up shifting up to third mid-wheelie before you find that balance. That’s OK – heck, that’s actually pretty cool.

Most riders agree that 2-stroke bikes are easier to wheelie than 4-stroke machines, largely because they’re lighter weight and their power is more manageable. However, for long-distance wheelies, people who have ridden both say a 4-stroke is easier to control, and it’s easier to keep the front end up provided you can get it there.

One of the keys to succeeding with wheelies is to adjust your mindset. There’s nothing so unusual about wheelies – you’re using the same controls and body motions you’d use to ride your bike normally. The only difference is that you’re compressing those motions, and the bike’s acceleration, into a shortened timespan to force the bike upwards instead of forward. Finally, don’t be afraid to fail. Even the most accomplished stunt riders were once beginners, and some would say failure is the fastest way to learn a new skill.